This is a guest blog by: Ruby Dimopoulos

To engineer a proposition advertising imposing payment upon the English people seeking healthcare is to suggest a fairly controversial idea, to introduce financial concerns to the public and  strip a sense of security provided by free healthcare felt by most-yet this idea has grown in prominence since being faced with the ever-increasing burdens on the NHS. The financial consequences of providing free healthcare to an evolving England puts exponentially increasing pressure on the NHS, and therefore pressure into identifying a solution; this leads us to analyse whether charging a person to see their GP would be a beneficial decision in improving the trust’s position.

The primary cause of the increasing pressure upon the NHS is the ageing population of Britain, with the life expectancy being 81.4 in 2020, 13 years longer than that in 1948, when the NHS was founded by Aneurin Bevan. Moreover, the care for an average 85-year-old costs 5 times as much as the average 30-year-old, thus revealing why there is obvious, significant pressure on our healthcare system, pushing it closer to a state of emergency. This coupled with the increasing population, of over 67,000,000 in 2020, exaggerates the need for more money to be available to the NHS.

Population expansion complements the financial issues faced by the NHS: supplementary money is spent by the government on health; last year an excess of £140bn was spent on health, and 30p out of every £1 of government spending went into health. Furthermore, the £110bn annual budget for the NHS front lines foreshadows the relief that will be felt by government expenditure provided there was a more augmented inflow from the privatisation of general practices, and thereby allowing for money to be spent on improved quality healthcare and machinery essential to maintaining and meeting the demands of advancing modern medicine. The urgency for additional funding is reinforced in the fact the King’s Fund documented that the number of NHS hospital beds in September 2017 was less than 50% of the number of beds 30 years previously, at only 142,000 beds. This perhaps shows us that the NHS has reached inevitable inadequacy in performance under its current circumstances, again advertising the benefits of providing an inflow of money from charging individuals to see their general practitioner.

However, there are consequential factors to consider before deciding to charge people to visit their GP; for those without financial flexibility it could be harmful for their health: half of adults in the US reportedly said that they or a family member skipped actually getting needed healthcare or filling prescriptions as a result of the cost deterrence. 1 in 80 said that their medical condition subsequently got worse. Thus, we must question if it is justifiable to take the risk of charging the English pubic, merely for financial gain-seeing as discreet and maybe fatal illness may go undetected, for example unruptured brain aneurysms often only show small symptoms (e.g. headaches) and only around 50% of ruptured aneurysm patients survive. It is arguable, therefore, that a policy of paying to see the GP could be fatal.

Furthermore, OECD figures show how the privately-run insurance-based American system of healthcare actually spends more per person on health than any other nation: in 1998, the health care spend per capita was 2,312 for Canada and 4,178 for the US.

For the government to capitalise healthcare somewhat, in my opinion, juxtaposes and diminishes the foundations of the NHS’s “free healthcare for all” agenda;  Steven Hawking, a man who lived with motor neurone disease for more than 50 years,  wrote in ‘The Guardian’ that the NHS is “the fairest way to deliver healthcare”. Therefore, despite the ever-increasing burdens on our healthcare service, making patients pay to see their GP is not the obvious solution for this problem. 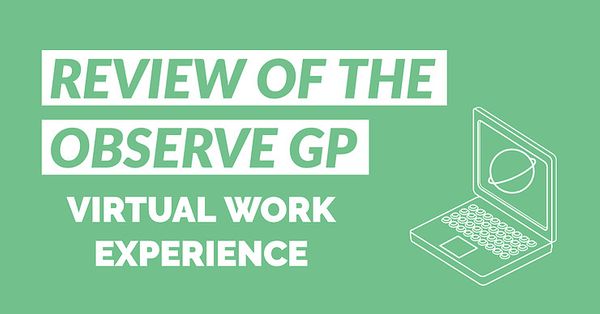 Words: Olivia Raymond-Hayling If you are looking to apply to medical school, whether this year or in future years- it is a good idea to get some work experience whilst

Quarantine has really flipped the world over- COVID 19 was in China one month and the next it’s in the UK. Many of us didn’t expect such drastic