Paul Kalanithi’s memoir is pretty much near the top of the list of the (many) books I’ve read over my almost 22 years. This amazingly written autobiography cleverly contrasts his experience of becoming a neurosurgeon and his exposure within Medicine to his role as a patient of terminal illness.  It is full of his in-depth reflections of everything from us as humans, identity, family, and the complexity of the brain and thought. I read this when I was thinking about studying Medicine and hoped it would give me the extra push during my A2 year when things were looking quite bleak.

I remember reading the first couple of pages of this memoir- about the author and their accomplishments, and I felt quite intimidated with the sheer amount Paul had achieved in his tragically short life. Nevertheless, I’d read a few reviews and knew I HAD to read this book even though it took me a while to get there. I also knew I would probably come across lots of new medical terminology, so I decided I’d research any terms whilst I read and beat the intimidation. So, with my notebook on my desk and the book in my hand I began to read.

I really can’t explain how amazed I am with Paul’s exposure to literature to this day. I hadn’t even reached the foreword and I’d read ‘Caelica 83’: this poem focuses on the transfer of life to death- when breath becomes air. It is an extremely short, moving piece that isn’t a warning as such but reminds the reader to make use of their time and live life whilst they can. When I have a lazy day with regards to revision this is one of the pieces I go back to and read- it seems to shift everything back into perspective.

The book begins with the prologue. Paul is looking at his CT scan with his wife Lucy. He is certain he has cancer in his spine but must wait for some medical tests as it is possible his demanding career is contributing to the weight loss that is characteristic of cancer. His suspicion of cancer is reignited when more symptoms appear sometime later, but he doesn’t communicate this with his wife.

Part 1: At age ten, Paul’s father (who is also a medic) and the family move from New York to Arizona. At this stage Paul isn’t very fascinated with Medicine as his father is often absent from home. Paul’s mother is anxious about the quality of education her boys receive as they are now living in ‘the least educated district in America’. She goes above and beyond to expose Paul and his brother to literature in an effort to ensure their academic success. More impressively, she drives her children over a hundred miles for them to take all their academic tests and rallies in school to improve their teaching. Before heading to Yale to study Medicine, Paul completes degrees in English and Human Biology at Stanford.

Years later with Yale behind him, newly married Paul and his wife Lucy begin their residencies. His experiences here highlight the need to treat his ‘paperwork as patients, and not vice versa’. In his fourth year, he must diagnose a fellow professor with pancreatic cancer who later questions him ‘Do you think my life has any meaning? Did I make the right choices?’. Paul is shocked that someone he considers a ‘moral exemplar’ is asking these questions.

Part 2: Here Paul is diagnosed with lung cancer after weeks of health problems. His treatment begins with one of the most reputed doctors in the field of Oncology, whom he expects to treat him as a consultant and not a patient. After this diagnosis, Paul and Lucy begin researching options to start a family and approach a sperm bank. With treatment, Paul’s cancer symptoms subside, and he feels like himself again. He has a CT scan which shows improvement in the cancer.

A few months later he has another CT scan. Unfortunately this one isn’t so optimistic- a large tumour is discovered in Pauls’ right lung.  Paul begins chemotherapy soon after which leads him to miss Graduation. His daughter is born later this year and Paul is elated. However his chemotherapy has failed, and Paul knows his time is nearing the end. He continues to write his memoir which he has been since his first cancer diagnosis and makes the most of his time with his little girl. The book concludes with an epilogue by his widow who focuses on her experience with Paul’s diagnosis and final days.

My personal experience with this memoir was quite unfortunate. I read it a year after it was published when I was dealing with my mother’s demise from a lengthy battle with metastatic gastric cancer. Maybe that’s why it took me a while to pick up this book in the first place- it was too close to home. Every thought that Paul penned whilst unwell, I wonder had my mother thought this? Was she satisfied with the life she had lived; did she feel ready to leave her children behind and did she feel she made an impact on this world?

I turn 22 soon- if I die 20 years later, I’d have lived the number of years my mother had. I too find myself thinking: What am I doing with my life? Am I content? Am I wasting my time? To ask these questions and reflect upon them is the purpose of this memoir. After a lot of hardship, I am now going into my second year of Medicine. When the time comes, I will make a difference to my patient’s lives and simply put that is my driving force: Until then I should keep on working hard so if my time will be cut short, I am satisfied with how I spent it at least. 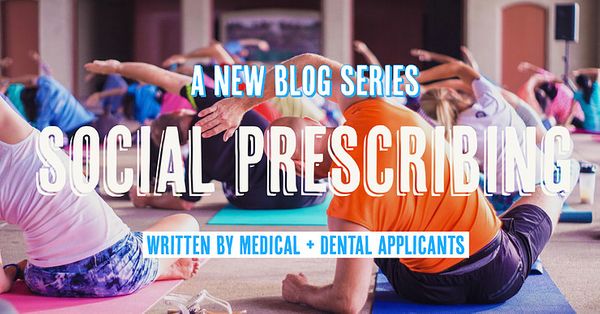 This is a guest blog, written by Umma Kadiri, Year 12 Social prescribing involves the referral of patients to a range of non-clinical services in the patient’s local community